Kuwait’s most recent parliamentary elections on September 29, 2022, turned over more than 50% of the country’s elected members of parliament (MPs). In a notable change from the outgoing parliament, just 22 of those elected MPs belonged to one of Kuwait’s tribes—down from a historic high of 29 in the elections that took place just 2 years prior. What explains this change? 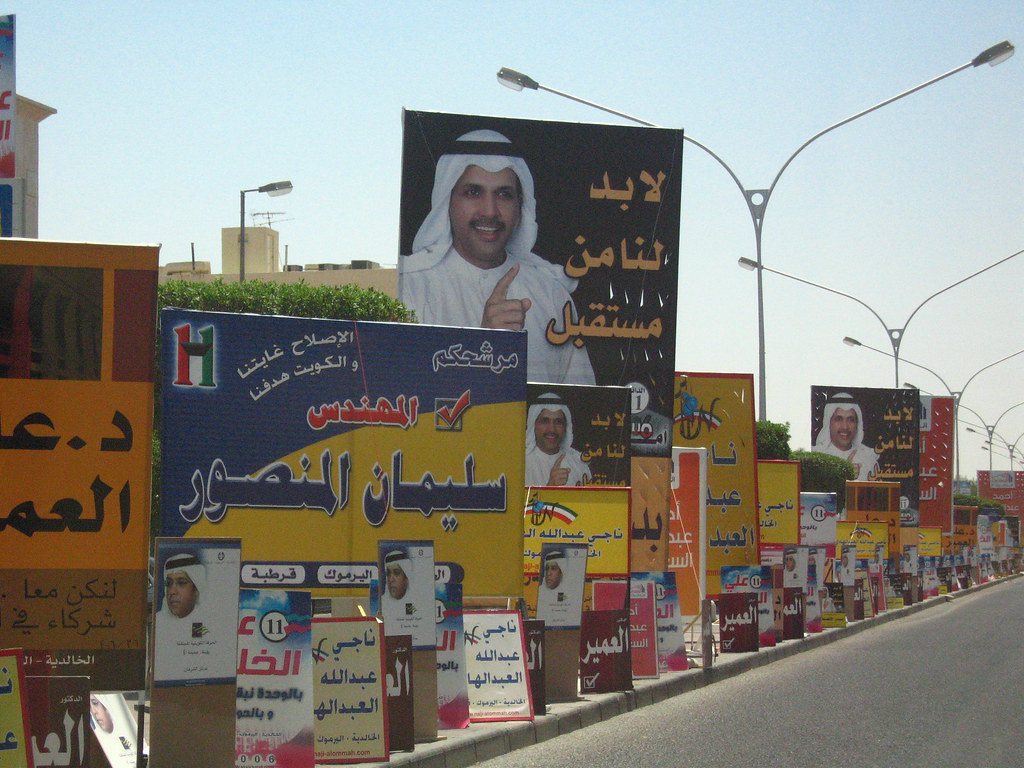 Election posters during the 2006 parliamentary elections in Kuwait, By Samira Zaman

Our recent article, “Defining the ‘Tribal Advantage’ in Kuwaiti Politics”, published in the journal Middle East Law and Governance, explored the interaction between tribal identity and elections in Kuwait. In doing so, we assessed tribe-affiliated Kuwaitis’ views on democracy, representation in Parliament, and coordination in elections using interviews, public opinion data, and statistical analysis of electoral returns between 1991 and 2016 (utilizing Michael Herb’s Kuwait Politics Database). The 2014 polling data from the Arab Barometer casted doubt on the idea that tribe-affiliated Kuwaitis have a particularly transactional view of politics than their counterparts, valuing it only in terms of the material benefits it provides them – a claim often made by non-tribal Kuwaitis yet not supported by evidence in available data. Furthermore, election returns and vote totals suggested that tribal representation in parliament was not much larger than the vote share garnered by tribal candidates, even if the representation of specific tribes has fluctuated over time. Tribes may be overrepresented by the number of winning candidates, but their votes are underrepresented by district size (i.e., tribe-heavy districts have more voters per parliamentary representative). If anything, therefore, tribes have been under-represented in the National Assembly. Overall, our findings suggested that it was not the mere existence of tribal identity but the development and maintenance by tribes of informal institutions of coordination and networking, based on a shared sense of identity, that provided tribes with ongoing political advantages. We revisit our findings in light of the recent elections.

Like its neighbours in the Arabian Peninsula, political parties are banned in Kuwait. However, Kuwait’s parliament holds meaningful influence over policymaking and houses a variety of ideologically based, but informal, political blocs, as well as other organized social constituencies such as tribes (extended kinship groups). Pre-election mobilization also takes place, primarily through informal diwaniyyat meetings (salon-style gatherings often held in private homes) and technically illegal electoral “primaries,” through which tribes and political blocs select the candidates who will receive their backing in parliamentary elections. Kuwait’s tribes have held primaries since the 1970s, leading some ideological non-tribal political blocs to adopt the practice as well.

Following electoral successes in recent years, Kuwait’s tribes have become a voice of growing opposition to the royal family. Historically, Kuwait’s tribes were represented mainly by so-called “service MPs”, who defended the prerogatives of the al-Sabah ruling family in exchange for gaining services for members of their tribes. However, in recent years, the informal institutions of the tribes, such as strong social networks and internal hierarchies, have bolstered tribal electoral mobilization and organization, leading to their growing electoral successes. This is also because tribal members work to coordinate behind a limited number of viable candidates rather than diluting the “tribal vote” across too broad a slate— in so doing fulfilling one of the typical roles of a political party. The electoral success of tribes also attracted criticisms from non-tribal Kuwaitis, who considered the tribes more loyal to their own interests than to those of the state or the wider Kuwaiti state. In turn, this led to changes to the electoral law introduced by the Kuwaiti ruling elite to undermine the electoral successes of Kuwaiti tribes.

Changes to electoral laws have affected tribal representation in ways that point to the importance of Kuwaiti constituencies’ coordinating mechanisms. The adoption of a single non-transferrable vote (SNTV) system introduced in 2012 by Amir’s decree, harmed large political blocs and the largest tribes of the ‘Awazim and Mutayri, by making it far more difficult to coordinate support for candidates through vote-trading. SNTV systems are known to have a disproportionate effect in breaking up representation of particularly large parties in a multiparty system, as witnessed in Jordan between 1993 and 2016, for example. In contrast, smaller tribes fare better in such systems because, due to their size, they tend to coordinate votes behind a single viable candidate, and therefore to close the gap in overall tribal representation.

These means of coordination have worked despite the 2012 decree, but they have also been vulnerable to state intervention more recently. Despite the immediate impact of the SNTV system, tribes’ organizational capabilities continued to improve in subsequent years. Indeed, the 2020 legislature saw the largest number of tribe-affiliated MPs (29) since the restoration of parliament in 1992. However, in response to this development, the Kuwaiti government enacted a severe crackdown on tribal primaries in the run-up to the 2022 electoral campaign, attacking one of the informal institutions that has helped tribes to organise and overcome institutional constraints of Kuwait’s electoral system. Consequently, tribal representation fell markedly to as few as 22 “tribal” MPs.

However, the imposition of SNTV, and more recently the crackdown on tribal primaries, have hit the largest tribes the hardest, with only two MPs hailing from the ‘Awazim tribe (compared with seven in the last parliament), and only three members of the Mutairi tribe (compared with six in the last parliament), gaining seats. This is largely an effect of the SNTV introduced in 2012 which, if anything, reversed representation in the National Assembly favoring smaller tribes over larger ones, similarly to how it made it difficult for larger parties to coordinate votes behind a limited number of viable candidates in other countries (e.g., Jordan). Yet, despite government attempts to halt the electoral successes of tribes in Kuwait, two tribal candidates still managed to win parliamentary seats from prison – the first time this has happened in Kuwaiti history. Both candidates had been accused of holding illegal tribal primaries in advance of the September polls.

The shift in tribal representation seen in Kuwait’s most recent election should be viewed within the broader history of tribe-state relations in the state. As members of Kuwait’s large tribes have shifted from being reliably pro-government to increasingly outspoken segments of the opposition, they have been targeted by shifts in the electoral system put in place by the government (specifically the change to SNTV), and their informal institutions, namely primaries, have become a focus of government crackdown. The latest crackdown on tribal primaries in Kuwait points to the continuation of a cat-and-mouse game between the ruling al-Sabah family and efforts of organized constituencies to gain meaningful representation in the country’s politically influential National Assembly. Our article identifies part of the organizational toolkit available to Kuwaiti society in contesting political power, but also the ability of central authorities to undermine legal tribal opposition through the regulation of elections.

Courtney Freer is Visiting Assistant Professor of Middle Eastern Studies and Senior Fellow at Center for Study of Law and Religion at Emory University. Her academic work focuses on the domestic politics of the Arab Gulf states and the interplay between Islam and politics in the broader Middle East.
Find Courtney on Twitter: @courtneyfreer

Andrew Leber is an Assistant Professor in the Department of Political Science and the Middle East & North African (MENA) Studies program at Tulane University. His work examines the ways that authoritarian regimes utilize public policies and information manipulation to deter domestic dissent, with a particular focus on the politics of the Middle East (or West Asia) and North Africa.

"Election Posters (4)" by Samira Zaman is licensed under CC BY-NC 2.0.