Life of a Linguist: Tim Bodt about his love for the Himalayas and doing immersive fieldwork 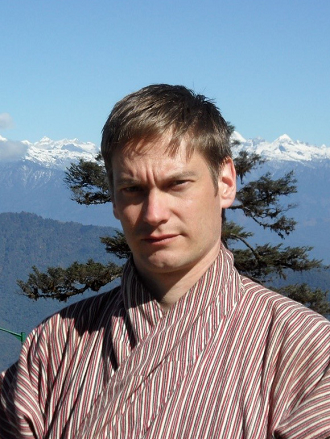 Tim Bodt, author of Grammar of Duhumbi (Chugpa) talks about his work in Tibet and Bhutan, the immense kindness of the people he has worked with and the importance of immersive fieldwork when studying languages.

My name is Tim Bodt. I have a lifetime fascination for the Himalayan region, its nature and environment, and its people and culture. I was able to express this interest through a linguistic career, in which I describe previously undocumented languages of the Himalayas and compare them to each other to help unravel the ethnolinguistic history of parts of this region. I wrote a grammar of Duhumbi, also known as Chugpa, a language spoken by around 600 people in West Kameng district of Arunachal Pradesh in Northeast India, which was published by Brill. After that, I continued using my data on the related languages to reconstruct the hypothetical proto-language, Proto-Western Kho-Bwa. Right now, my research counterpart in Nepal and I are processing recordings we made in 2019 of the last two speakers of Kusunda, a language isolate from Nepal. Since one of these speakers passed away since then, we are trying to transcribe and translate and hopefully further analyse as many of these recordings as possible with the single speaker left. We will also try to find out whether there is any evidence that Kusunda, or languages related to it, were perhaps once more widespread throughout the Himalayan region.

I have had an affinity with languages from a young age, picking them up quickly and always enjoying learning and speaking new languages. My interest in the Himalayas, and Bhutan in particular, brought me into contact with Bhutanese people when I was still in high school. I quickly picked up Dzongkha and Tshangla, two Bhutanese languages, but also learnt some Tibetan and Nepali. I chose to study environmental economics and social forestry as my graduate degree, because of my interest in the environment and the problems that it, and consequently people, face. While working in Tibet and Bhutan, my language abilities further developed, and I also further cultivated my linguistic knowledge. Then, Prof. Dr. George van Driem, whom I knew since my high school days from our shared passion for the Himalayas, encouraged me to document a Himalayan language for my Ph.D. That’s when things got serious, and the moment that I made linguistics my full time career.

How did you choose Himalayan languages as focus for your research?

Actually, as the previous two sections indicate, it rather was the Himalayas and her languages that chose me!

Become part of the people. 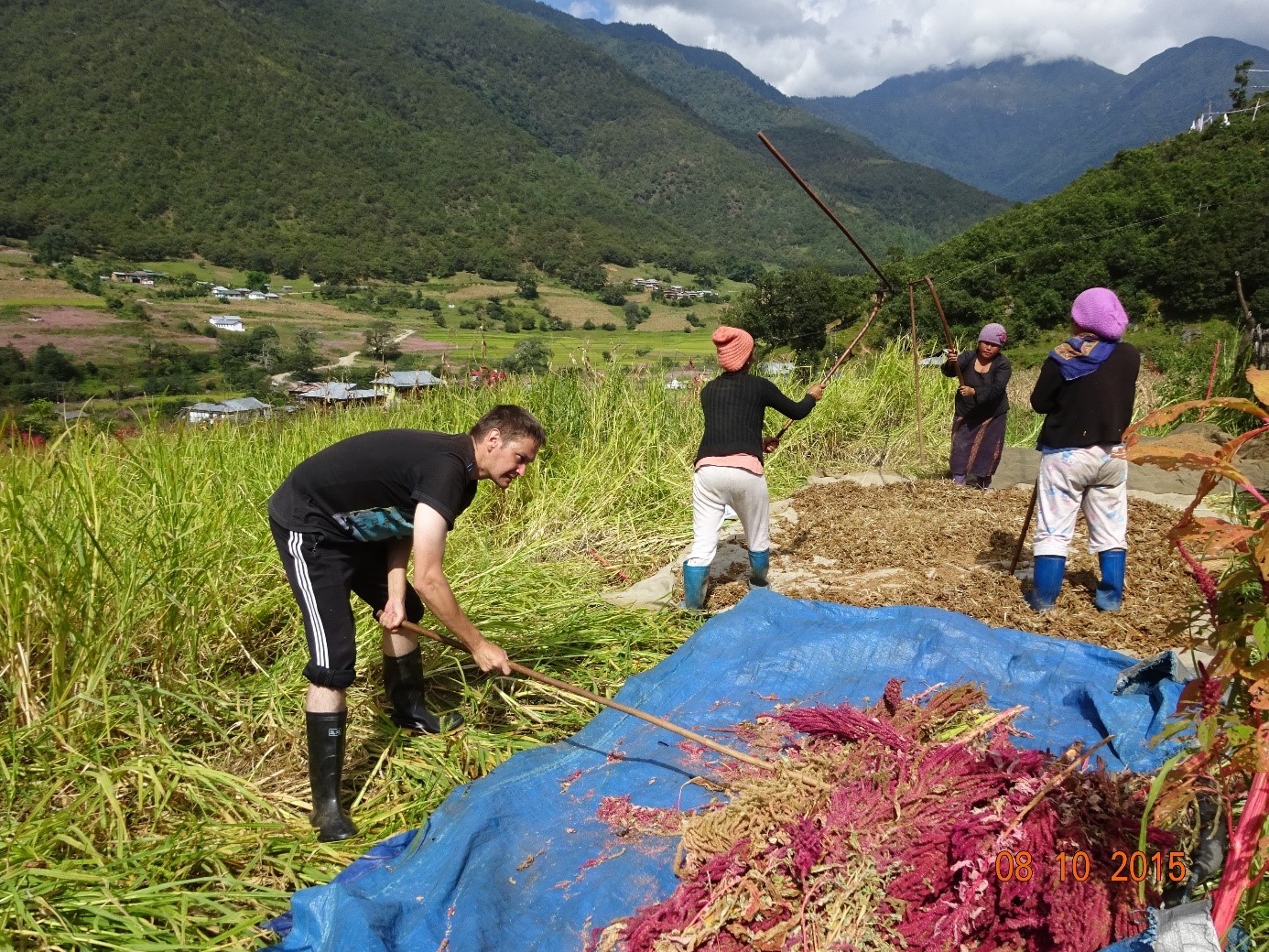 ‘Immersive fieldwork’ can give you blisters... Unable to thresh the finger millet with the rotating yarjung thresher, I was assigned the easier job of threshing the amaranth with a simple wooden stick. Chug, Arunachal Pradesh, India, October 2015.

Quite clearly, the immense kindness of the people I worked with. They adopted me into their lives as a part of the community and as a part of the family. In addition to family in my native Holland, I now have families in Bhutan, Nepal, and India. I remain in contact with all of them. Nothing I achieved would have been possible without their support and cooperation, both with respect to the actual linguistic research – for example, by being the engaged storyteller or the patient consultant – but also by providing this all-important home-away-from-home, by being there for me. I hope that whatever I have produced will ultimately benefit these communities and individuals in one way or the other. 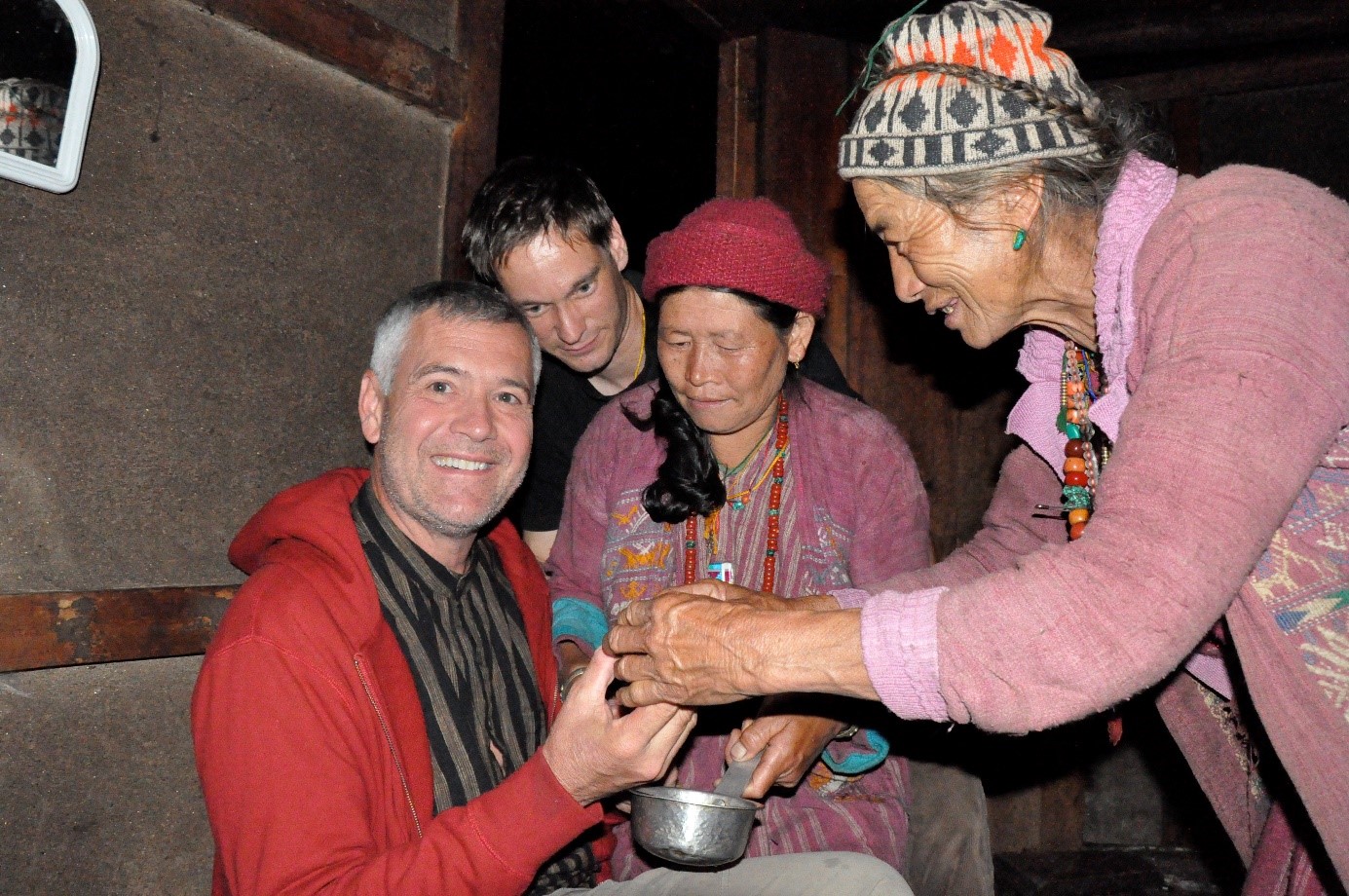 There are plenty of such anecdotes. Wait for my autobiography to appear at some moment in the future, I will share them all! 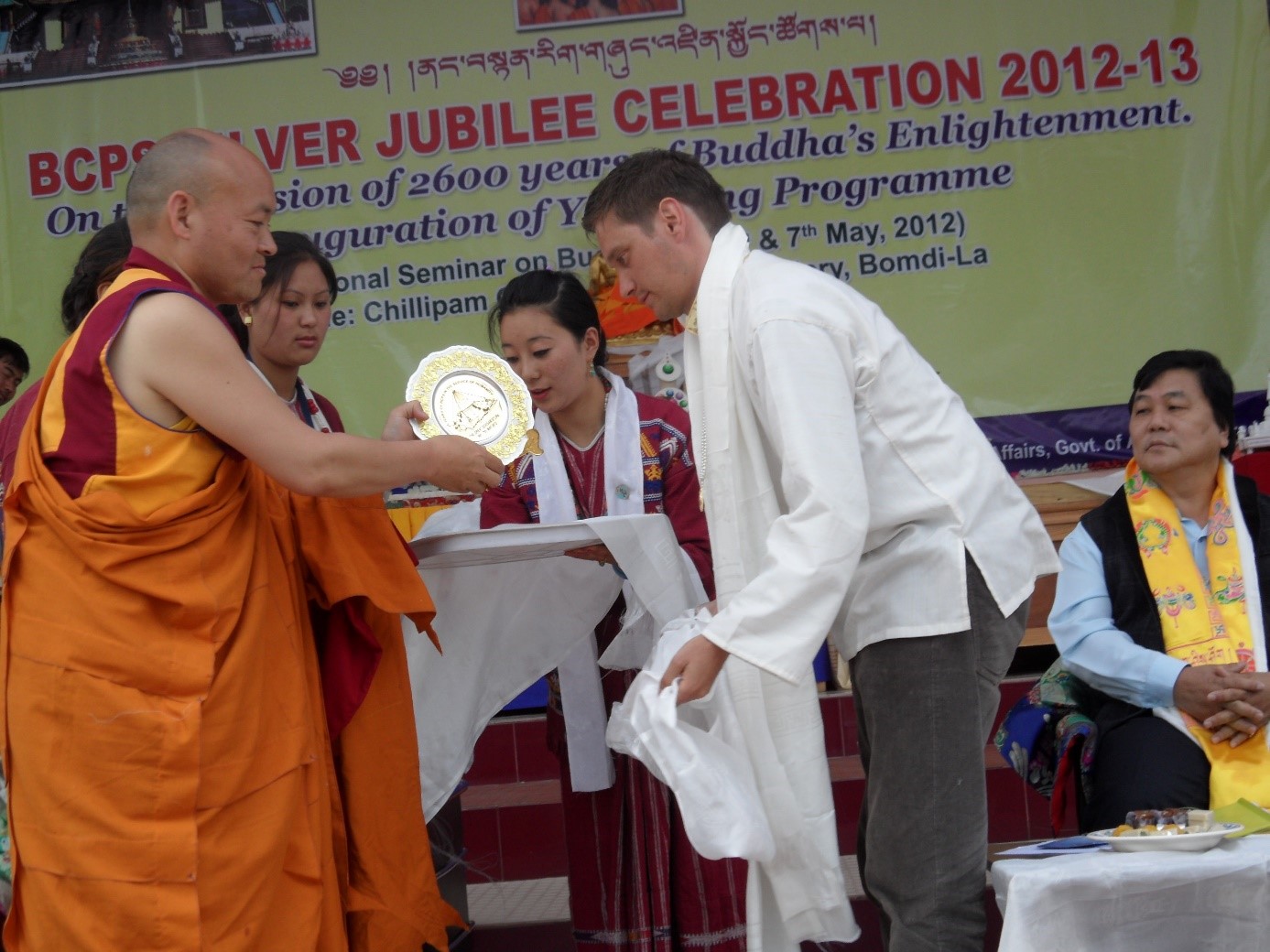 As one of the few resident foreigners in the area, who moreover speaks the local languages and Hindi, I was felicitated with an honorary award and invited to give a speech on four occasions, like here by the late Tsona Gontse Rinpoche at a function in Chilipam, Arunachal Pradesh, India, May 2012.

Most of my publications bring new information on languages that have hitherto been poorly described, or even not described at all. Much of my work is based on original, primary data that I collected myself, not on secondary data. This includes the Grammar of Duhumbi (Chugpa), but also my publications on more specific linguistic themes, or my historical-comparative studies comparing cognate forms in different languages. I also wrote more general ethnolinguistic descriptions, again based on new data and insights.

Well, perhaps some observations on linguistics in general.

There is an immense value in all linguistic disciplines. But as languages change rapidly or even disappear altogether, I find proper documentation and description of the linguistic diversity of the world to be of paramount importance. Such work retains the opportunities for future linguists to do linguistic study and research in any of these other disciplines. Hence, I would encourage any linguist to consider this when choosing a topic for an MA or Ph.D. research, for example. In addition, writing a complete grammar forces you to familiarise yourself with basically every aspect and discipline in the field of linguistics, so you become quite an allrounder!

Like my ‘five-worder’ indicates, I think that the epitome of linguistic fieldwork lies in ‘immersive’ fieldwork, in becoming a part of the society whose language you describe. Even at present, some people still practice linguistic fieldwork by getting the data, writing the grammar, and subsequently obtaining their degree or the funder’s approval. People don’t actually learn to speak the language, people don’t understand the culture that this language expresses, and there is an almost immediate disconnect from the speakers as soon as other goals are achieved. I find that a real missed opportunity, and it may create some feeling of distrust and animosity among linguistic communities. But then, on the other hand, not every person is the same, and local fieldwork conditions may not appeal to everyone in the same way.

I think it is also useful to stress the importance and significance of community-oriented publications, such as the Duhumbi dictionary and storybook that I published. In addition to benefiting research, these publications benefit the people that speak the languages, now or in the future. It is not just our personal careers or more broadly science that matters. As researchers and academics, we have a strong moral and ethical obligation to the people that we work with. I think it is a shame that linguists, but also funding agencies and publishers, often do not incorporate such community publications in their requirements or budgets. 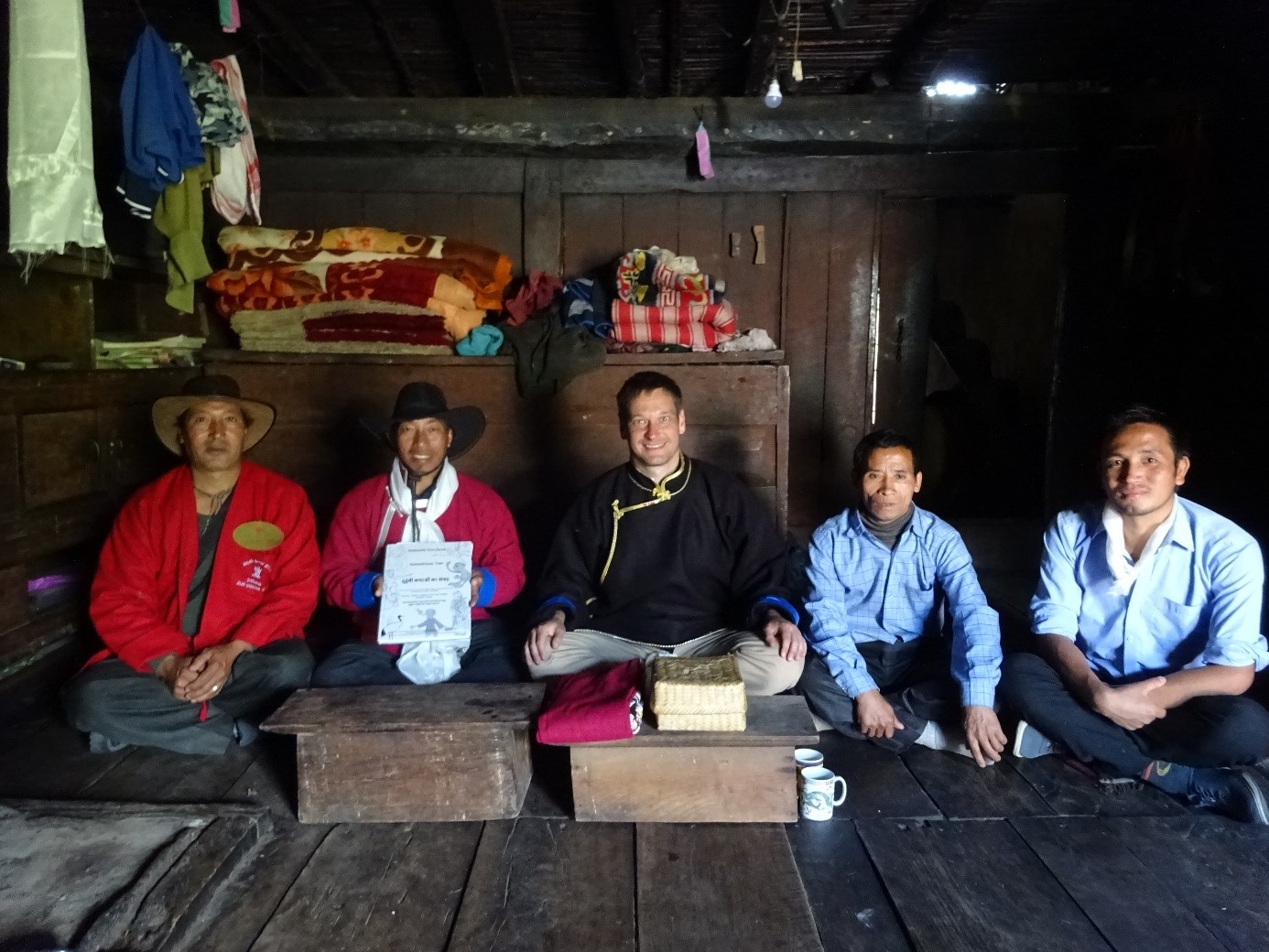 Handing over copies of the Duhumbi Storybook to local leaders in the Chug valley. Chug, Arunachal Pradesh, India, October 2018.

Finally, there is the matter of access to data. Still, till now, despite all good intentions, too often linguistic data, including recordings but also publications, end up in databases that are basically inaccessible ivory towers, on personal computers or hard drives, and behind paywalls. This all limits access not only to researchers in less advanced parts of the world, but more importantly also to the speech communities themselves. I think the safe storage of data, and the provision of access to people who want to access them, should be encouraged and put into practice.

Thank you for your time, Tim.