Life of a Linguist. Erin Shay on Chadic Languages and Fieldwork in Cameroo 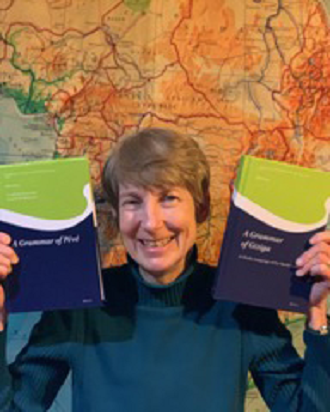 New Books in Languages and Linguistics
Erin Shay, "A Grammar of Giziga: A Chadic Language of Far North Cameroon", (Brill 2021)

We recently joined Erin Shay, author of A Grammar of Pévé and A Grammar of Giziga for a discussion about how she became a linguist and how she conducted her fieldwork in Cameroon.

My name is Erin Shay. I’m an Assistant Professor Adjunct at the University of Colorado Boulder, USA, the university where I earned my Ph.D. in Linguistics. The focus of my work, beginning with my dissertation, has been to gather data from lesser-known languages of the Chadic language family, spoken in North Central Africa, and to write descriptive grammars and dictionaries of those languages to help preserve them and the cultures they represent.

I’ve been fascinated by languages since I was a child. During road-trips across the western U.S., my brothers and I heard our parents argue about pronunciation, morphology, and language usage in American English. My father, a singer, actor, and professor, taught us phrases in Irish and in Japanese. My mother was a speech therapist. In school, my brothers studied German so they could tease their little sister without getting into trouble with our parents. I studied German classes so that I could fight back. Time spent with my brothers in Europe helped feed my passion for similarities and differences among languages. Later in life I entered the graduate Linguistics program at the University of Colorado. Like many non-linguists, I thought that studying linguistics was all about learning how to order a beer in 20 different languages. It turns out there’s a lot more to it. I was fascinated by introductory courses in phonology, morphology, syntax, and semantics, and soon I was on the path towards a Ph.D. My advisor and colleague, Prof. Zygmunt Frajzyngier, helped guide me towards studying Chadic languages, a group of about 150 languages, most of them undescribed.

The thing that struck me the most during fieldwork is the fact that speakers of radically different languages have so much in common at a deeper level. One person’s native language may involve sounds and forms that a native speaker of another language cannot even produce. Direct translation from one language to another may seem unfathomable. However, every phoneme, morpheme, word, phrase or sentence plays an important role in its own language. Moreover, speakers of every language share so much: Interest, knowledge, abilities, aspirations, experiences, thoughtfulness, history, devotion, humor, kindness, you name it: We all belong to the same race. I am deeply grateful for the mind-opening time I have spent with native speakers of various Chadic languages, some of whom have become long-time friends. 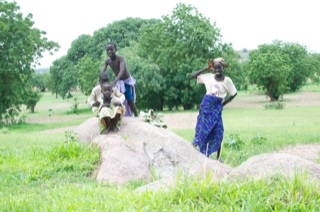 My trip to Cameroon was a once-in-a-lifetime experience. When I received research funding from the American Council for Learned Societies, my husband suggested that we dip into family savings so that he and our two teenagers could share some of my experience. The plan was for my husband and kids to spend a week in Northern Cameroon while I began conducting fieldwork in the town of Maroua. Everything went smoothly, even the flights from the U.S. to Paris to Yaoundé, capital of Cameroon. A driver met us at the airport and drove us to Maroua, where a cozy motel room was waiting for us. The people of Maroua were so pleasant, kind and helpful that we never felt out of place. When the family traveled into the hills, our kids went hiking with local kids. On the flip side, co-author Lazare Wambadang left his family each day in order to drive 1.5 hours to Maroua, spend hours discussing his native language, and drive home so that he could go to work the next day. The results of the whole experience include a lovely Brill publication, happy associations between my family and Cameroon, and a long-time friendship with Lazare. 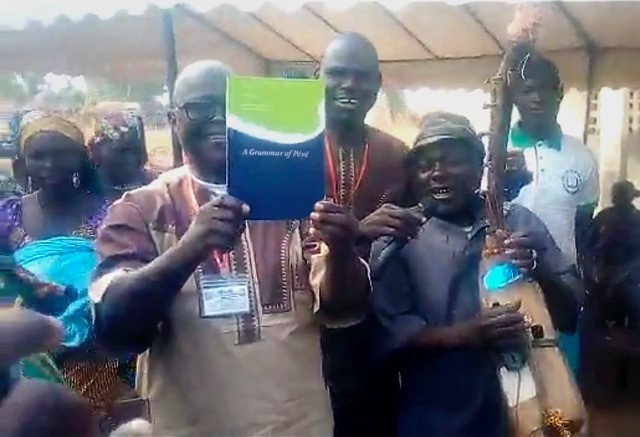 Lazare Wambadang presents A Grammar of Pévé at the Pévé Cultural Festival in Lamé, Chad, December 2019. A video of the festival can be found here.

Can you tell us a bit more about your studies and how they contribute to linguistics specifically?

The books are descriptive grammars and dictionaries of lesser-known languages. Each publication describes a wide range of lexical and morphological forms used in the spoken language and describes the functions carried by those forms within the language. The data and their analyses will add to the data base for linguistic research involving the forms and functions of lexical and morphological items within and across languages. The data will also provide historical and cultural information for sociological and historical studies. Because languages change greatly over the years and may even disappear, such publications will help preserve the culture and history of native speakers of languages.