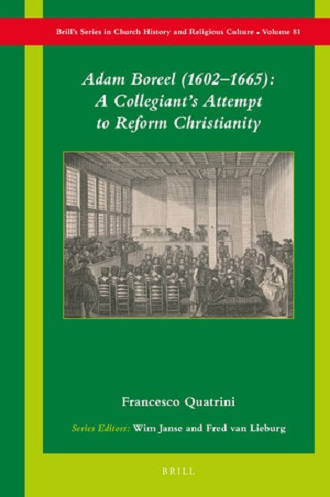 Adam Boreel (1602-1665): A Collegiant's Attempt to Reform Christianity (Brill, 2020) is a biographical and thematic study of one of the most enigmatic – and perhaps one of the most important – of the period’s religious and scientific thinkers. In the first major biography of this figure, Quatrini reconstructs from complex and often ambiguous sources Boreel’s childhood in the Dutch Reformed church, the intellectual agendas and travels by which he was exposed to more radical forms of Christianity, the friendship networks in which he worked on projects that seem to have designed the conversation of the Jews, and most significantly of all the unofficial institutions that fostered the wide-ranging and open-ended conversations on religious subjects that marked the communal life of the Collegiants. Quatrini’s outstanding new book opens up new windows in our understanding of early modern religion and science.