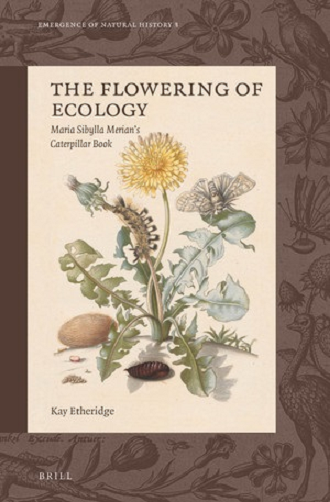 This article was first published on Art Herstory, a website and blog dedicated to showcasing the work of female Old Masters. Find Art Herstory online and on social media: Facebook, Instagram, Twitter and LinkedIn. 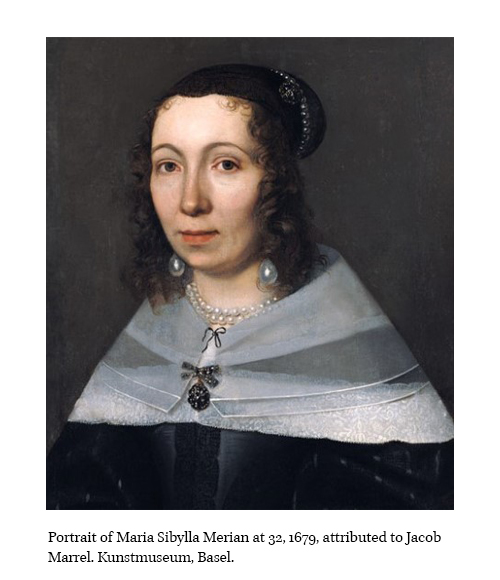 "Because [Merian] also strove constantly to adorn her flower paintings with caterpillars, butterflies, and other insects … she paid very close attention, over a long time, to [their] wondrous changes, the particular plant foods, and more… By many curious investigations, she made quite new discoveries about such insects for the further advancement of natural science."
- Johann Doppelmayr on Maria Sibylla Merian in Historische Nachricht von den Nürnbergischen, 1730.

The reputation of Maria Sibylla Merian as a talented and skilled artist is firmly established among those familiar with her work. Although this was also the case in her day, her contemporaries might have been more likely to think of her as a “natural philosopher,” an early designation for someone studying natural science. By the time of her death in 1717, she had raised at least 300 species of insects and produced four books on her scientific work. Her images were the first to portray insect metamorphic cycles and behaviors centered around the plant species that nourished the caterpillars. 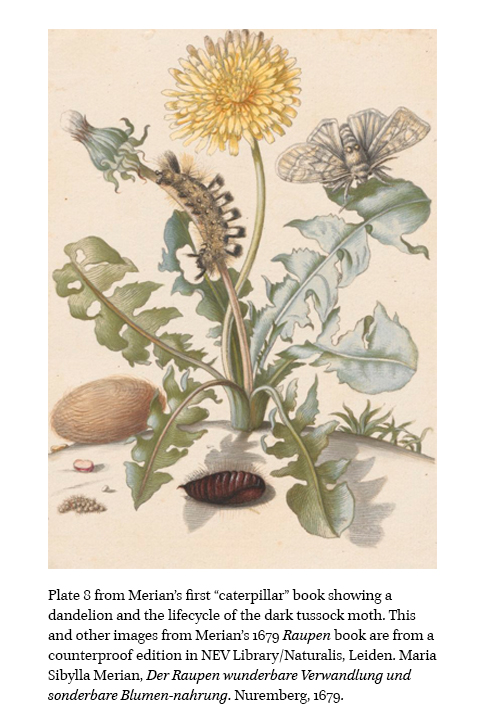 Merian’s moths and butterflies come in for a landing and lay eggs. Caterpillars munch their way across leaves, or stretch toward another stem. Although her images are beautiful, she did not hesitate to include a more somber note on behalf of scientific accuracy. Many of her images depict various parasitic wasps and flies that make a meal of helpless caterpillars and pupae. 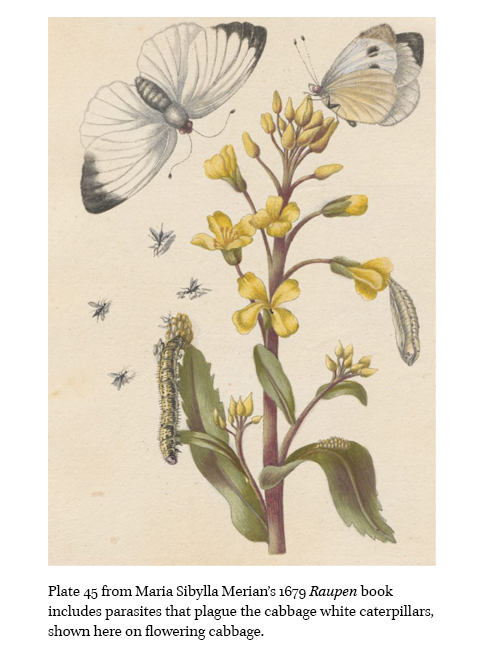 Today, Merian would be described as an entomologist working in behavioral ecology. The metamorphosis of a young woman trained in drawing, painting, and etching into a scientist is the focus of this essay. From the fifteenth through nineteenth centuries, such a path was not so very unusual for an artist. Today, science and art typically are separate disciplines. Nevertheless, careful observation is a hallmark of both endeavors, and there is more crossover than might be imagined.

For the modern audience, the combination of ecologically related plants and animals into one image is a common composition. When Merian published her first “caterpillar book” in 1679, it was groundbreaking. This is not to say that caterpillars and their adult forms were absent from paintings both before and after Merian. Insects and other small animals adorned countless still life paintings, including those by Giovanna Garzoni, Clara Peeters, Judith Leyster and Rachel Ruysch. In these luscious works, artists combined plants and animals for reasons aesthetic and symbolic rather than biological. Flowers painted together often did not bloom at the same time of year, and caterpillars were usually unrelated to adult insects portrayed. 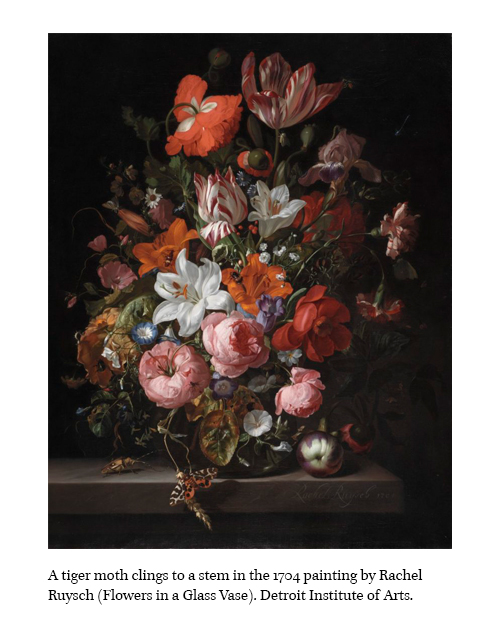 Before Merian, information on plants was confined to botanical books with no connection to the insects that ate and pollinated them. Books about insects often showed the different life stages on separate pages. Each plant or insect specimen was confined to its own space, interacting with nothing but the eye of the viewer. 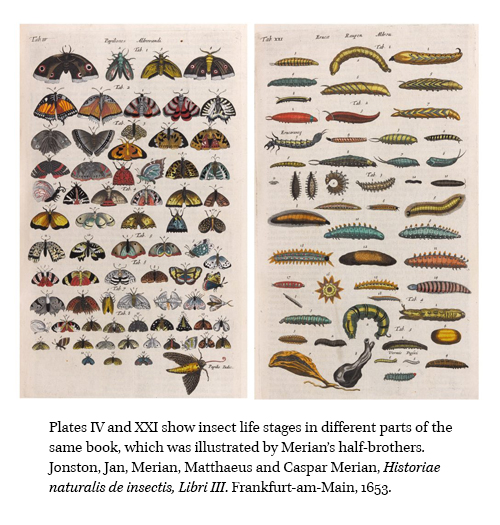 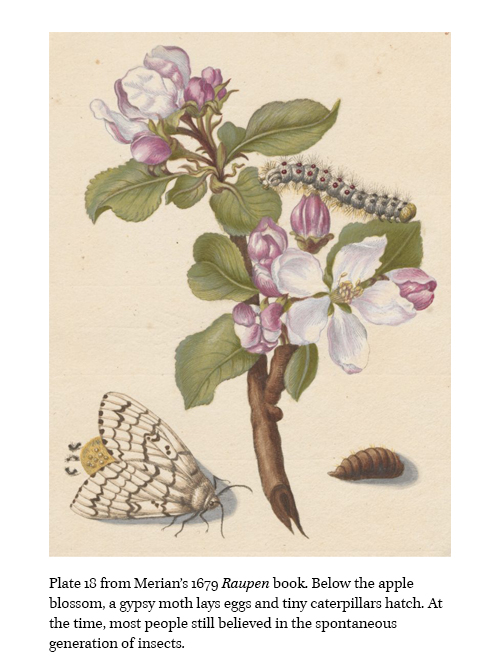 In 1647, Maria Sibylla was born into a Frankfurt family of successful engravers and publishers. Her well-known father, Matthaeus Merian the Elder, died when she was three. Her mother soon remarried, and her artistic stepfather, Jacob Marrel, became an important mentor to her. Her half-brothers, Caspar and Matthaeus Merian the Younger, also may have contributed to her early art training. 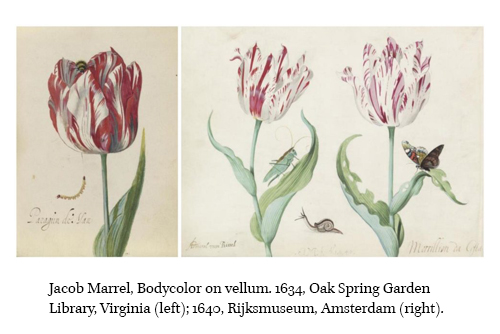 The tulip paintings of Marrel, adorned with insects, strongly influenced Maria Sibylla. Like all budding artists, she learned by copying the works of others. At an early age she could depict plants and insects with precision, a skill developed from close observation of nature.

The insects in Marrel’s flower paintings were decorative additions, but not always true to life.

His stepdaughter became curious about the insects for their own sake, and in particular about their metamorphosis. As a young girl, Merian observed and painted silkworms, a species raised commercially by Marrel’s brother and others in Frankfurt. After seeing silkworm metamorphosis, she wondered if there was a common pattern of such life-changing events in all moths and butterflies. When she was just 13, she conducted her first independent “investigation” of butterfly metamorphosis on the small tortoiseshell (shown below). 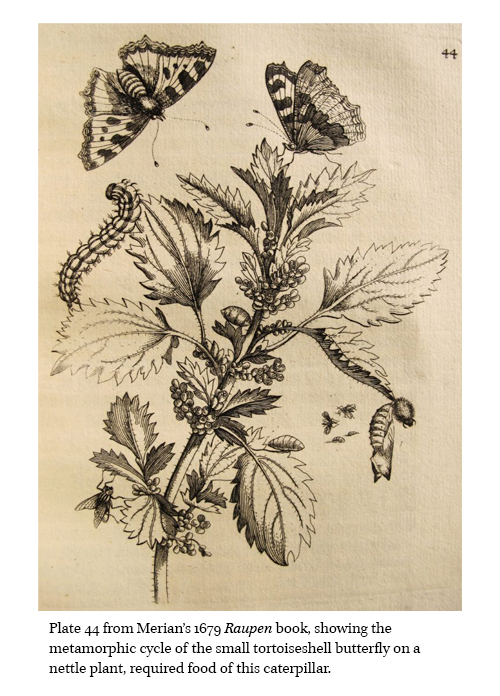 At 18, Maria Sibylla married her stepfather’s former apprentice, Johann Andreas Graff. Soon after the birth of their first daughter, the young couple moved from Frankfurt into his family home in Nuremberg. Here she created her first publications, slender volumes of floral compositions (Blumen books). These sets of prints could be used as models for painting or embroidery. She and her husband published the first set of twelve flower plates in 1675 and two more sets of twelve by 1680. 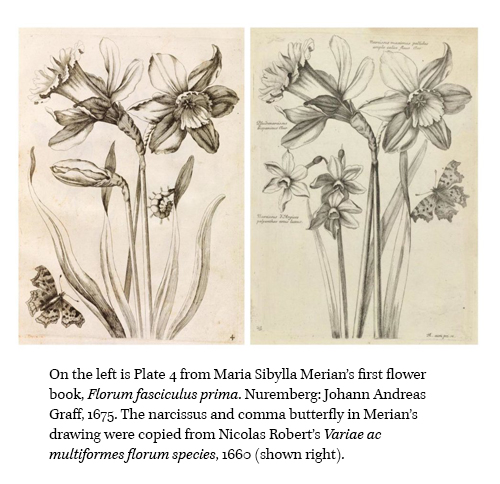 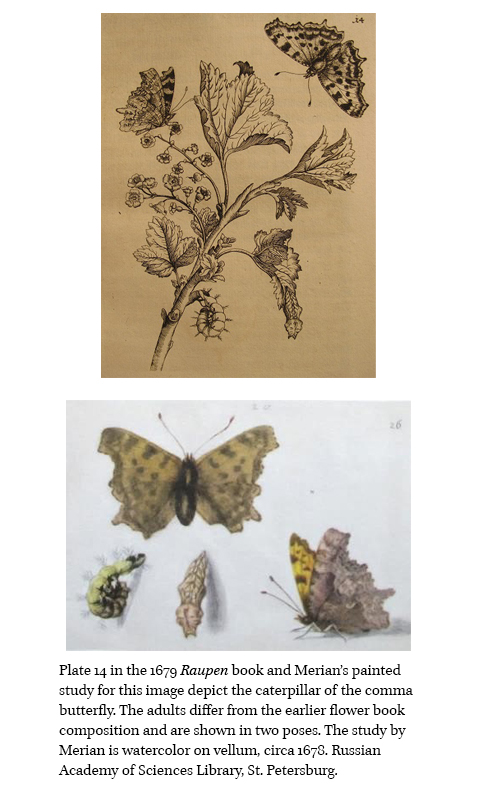 In the plate above, the comma butterfly caterpillar is feeding on red currant, its natural food. This is a major shift from her decorative flower books, in which she made no effort to pair insects with their natural foods. In raising her own insects, Maria Sibylla learned early on that she needed to know their foods. She wrote that:

"It is surprising to note that I often had caterpillars which fed on one flowering plant only, would feed on that one alone, and soon died if I did not provide it for them." Merian was the first to write about this significant relationship between various insects and plants, a cornerstone of modern ecology. 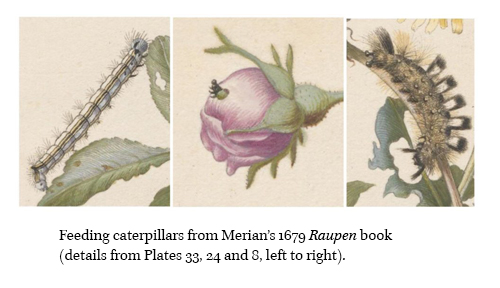 Today we appreciate the beauty and detail of the images that Merian created almost 350 years ago. However, we must turn to her writings to understand the obstacles that she overcame and the discoveries she made. For at least 50 years, she searched fields, gardens and forests for caterpillars. Some were colorful and easy to spot, but many were camouflaged on the vegetation.

Wooden boxes housing individual insect species filled the rooms of her homes. During the insects’ growing seasons, she had to constantly feed and maintain her small captives. At some points in early summer, she may have had a dozen or more species growing in her laboratory/studio. To add to her labors, many caterpillars require completely different foods. As they grew, she made careful observations of their behavior and metamorphosis. She compiled pages of notes and made painted studies such as the one below. The time-consuming nature of her exacting work is evident in her writings. In one entry, she described a caterpillar that began its metamorphosis late in the day. She then stayed up “to paint it from midnight until morning” to capture the phenomenon. Adding to her challenges, more caterpillars died than survived to metamorphosis (the same is true in nature). It took her up to four years to achieve an adult for some species. 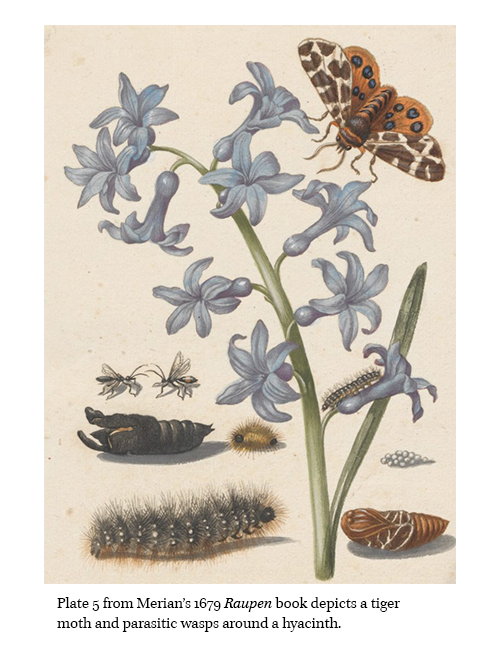 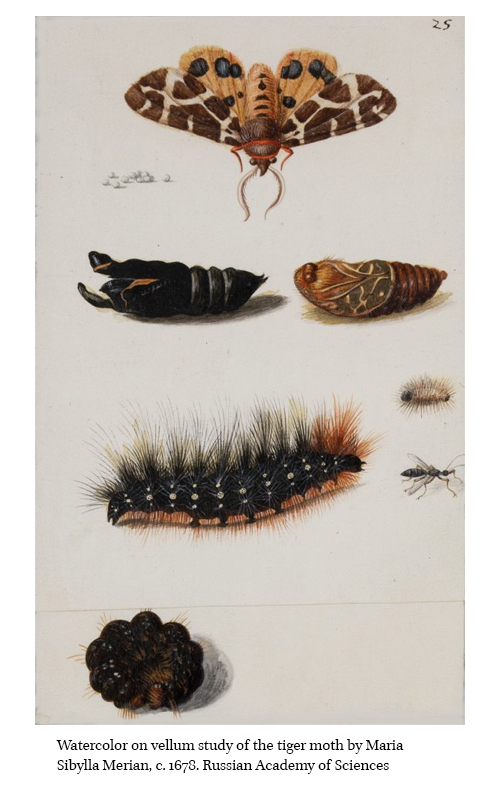 Merian’s revolutionary ecological images are only part of her story. She was also exceptional in producing all of the content of her books, even marketing them for sale. Few naturalists made their own images, and hiring artists and engravers was prohibitively expensive. Many naturalists died before finding the funds to publish their work. Merian used her research notes and her painted studies as she wrote the text and composed the final images. She states that there is nothing in her 1679 Raupen book that she did not etch or engrave.

Although she strove to create aesthetically pleasing compositions, Merian’s goal was to include as much information as possible about the lives of her small subjects. She depicted details such as chewed leaves, deadly parasites, and the dissected pupa of the tiger moth above. Contrary to some ideas, she did not trace or copy her painted studies exactly when etching her copper plates. Careful observation will reveal several differences in the tiger moth study and Plate 5. Such changes from the original studies reflect the decisions she made when composing the final image. Sadly, her plant studies seem to have been lost.

Her later work and influence 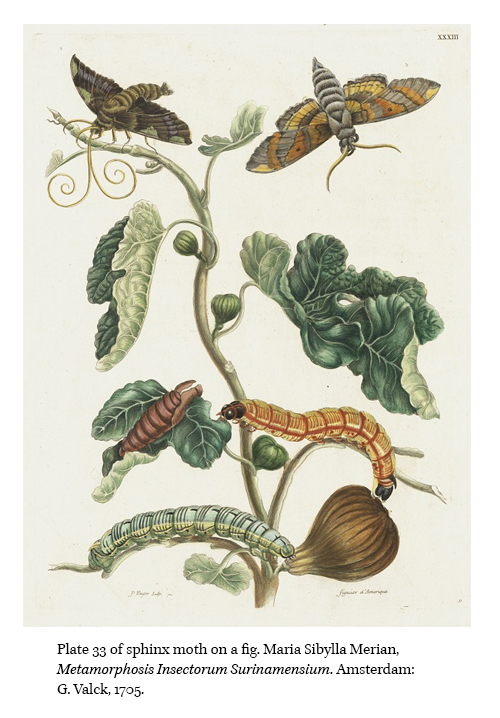 Merian traveled to Surinam in 1699 at age 52, accompanied by her younger daughter, Dorothea Maria. She made this dangerous voyage expressly to investigate the life cycles of showy tropical insects she had seen preserved in Dutch collections. Her reputation today is based largely on Metamorphosis Insectorum Surinamensium, the book that resulted from two years of study in the tropical forests. It is unfortunate that the tropical book overshadowed her earlier books on the smaller and less colorful European insects and plants. In fact, the Raupen books are based on a much longer period of study. As a result, they were actually more detailed and accurate than the more famous tropical volume. Still, Metamorphosis was very influential, and the plates of artist-naturalists like Mark Catesby and others echoed Merian’s work. 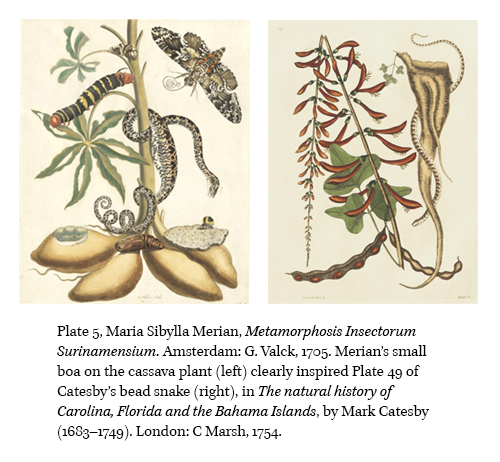 In view of the challenges described above, making a living as an artist would have been an easier road than work as a publishing naturalist. Natural history books were never guaranteed generate a profit, and indeed, often lost money. As to her personal situation, she published her first scientific work within a year of her second daughter’s birth. As she wrote, she was “obliged to compile [the book] while managing her household.” 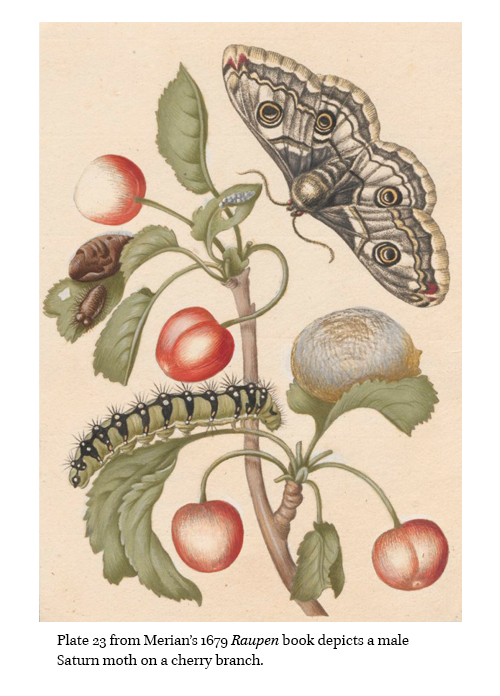 Some have proposed that Merian’s work was motivated by her religious beliefs. However, the level of piety she expressed in her writing was entirely conventional for the time. In fact, her pious expressions were less frequent and often milder than those of her contemporaries. The key to her motivation is found in her writings, and it matches that of scientists through the ages. Merian was driven by curiosity and the excitement of discovery. Her curiosity led her to dissect pupae as they developed. On more than one occasion, she cut open plant galls to see what was inside. She often expressed excitement, as when she was finally successful in raising an adult Saturn moth: “Thus, when I did obtain it, I was filled with such great joy and was so pleased in my intent that I can hardly describe it.”

In Maria Sibylla Merian, an artist’s eye combined with a lifelong curiosity about insects. Her training, talent and industry led her to write and publish books on insects at a critical point in European natural history studies. Her work not only added to what we know about the interactions of insects and plants, but also set a new standard as to how nature was described and portrayed.

Dr. Kay Etheridge is Professor of Biology at Gettysburg College and a founding member of the Maria Sibylla Merian Society.

Earlier publications in physiology and ecology include studies on tropical bats, manatees, lizards, and salamanders. Her current scholarship focuses on the integration of natural history images and the history of biology. She is an editor of the Brill book series* Emergence of Natural History.

Her most recent publication on Merian is The Flowering of Ecology: Maria Sibylla Merian’s Caterpillar Book (Brill, 2021).