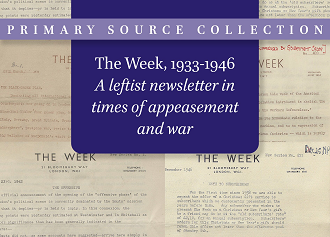 Patrick Cockburn is not only a prize-winning author and journalist, but also a rich source and a considerable authority on the life and work of his father, Claud Cockburn, legendary founder-editor of The Week, published online by Brill earlier in 2021.

In this interview, Patrick Cockburn talks to Peter O’Connor about Claud Cockburn’s upbringing in China, Korea and central Europe, about the circumstances prompting the publication of The Week, and, most tellingly, on the resistance put up by political and media elites, in particular the ‘Cliveden Set,’ to Claud Cockburn’s astonishingly well-informed upstart newsletter.

Patrick Cockburn also discusses the influence and character of The Week and its network of informants, where it stood in relation to officialdom and British security agencies, and considers the reach and effectiveness exerted by this low-budget, low-circulation organ, given both the consistently alarming quality of its journalism and the determination and fearlessness of its editor.

The interview touches on The Week’s role as the forerunner to Private Eye as the journal of record of the sins and omissions of the powers that be in British and other politics in a time of considerable discord.

Rounding off, Patrick Cockburn examines his father’s working theories on how to maximize the effectiveness of low-circulation organs and considers how modern scholars and readers might approach Claud Cockburn’s fabled newsletter, now finally available online, in full, save during the suspension of January 1941 to October 1942. There is and always will be far more to be said about The Week and its intrepid editor, but this interview provides a worthwhile and absorbing overview.