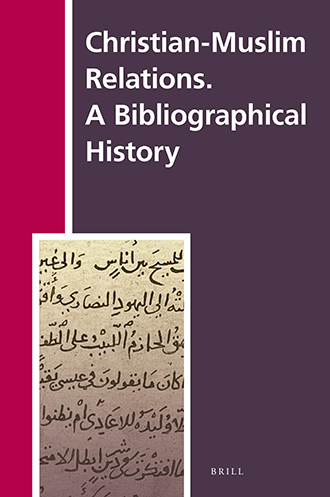 Professor Emeritus of the University of Birmingham

As the book series Christian Muslim Relations approaches its 20th volume, we spoke with Professor David Thomas, Editor of the series, about the project that has taken up such a significant part of his career, about positive and negative relations between Christians and Muslims, and about his expectations for the series in the future.

Professor Thomas, it is a pleasure to be able to speak with you. Can you introduce yourself to us and share with us why the history and thought of Christian-Muslim relations is important to you?

Thank you for this opportunity to talk about a project that has taken up a much larger part of my life than I could ever have foreseen when it was in its first stages.

Regarding myself, I am Professor Emeritus of Christianity and Islam at the University of Birmingham. Before I retired about five years ago, I taught in the Department of Theology for more than thirty years, specialising in Islamic thought and Christian-Muslim relations. This interest was first kindled by two years as a teacher in the Sudan and (as is so often the case) by an inspiring lecturer at University. He taught not only the Qur’an and basic Islamic principles but also the first historical developments of Islamic theology and the resemblances and differences between it and Christian theology.

In my first year as a lecturer at Birmingham I was asked to teach a course on the history and theology of Christian-Muslim relations. This led me to see the importance played by the two faiths in the relations between communities in many parts of the world. Maybe the main element that interested me was the many apparent similarities in the teachings of Islam and Christianity, and the way they nevertheless gave rise to remarkably different structures of religious thinking and to societies that had hardly anything in common.

Can you tell us about CMR and why it was established?

About twenty years ago I was invited by Brill to start a new book series to be entitled The History of Christian-Muslim Relations. It would publish edited texts and translations of writings from the history of Christians and Muslims, monograph studies and collections of essays. Working on this series, I came to see that there was no general reference guide to all known works on Christian-Muslim relations. Such a resource could help new and established researchers to see the vast range of works that were composed over the centuries and the arguments used by their authors. A salient feature in many of these arguments is that they were simply repeated through the years and accepted without question as reliable, even though there is no strong scriptural authority behind them.

I brought this idea to Brill, and they must have seen greater possibilities in it than I did at the time. They took it up and Christian-Muslim Relations, a Bibliographical History was born.

CMR attempts to describe and analyse every work written by Christians and Muslims about the other and against the other throughout the world from the time of the origins of Islam in the early seventh century to the start of World War I at the beginning of the twentieth century. It centres on works that emphasise the religious character of relations, rather than the social, political or military.

I believe you are currently working on vol. 20, which is quite a milestone. Was the project always intended to be this big? And how many volumes will it end up being when CMR is done?

When I first began to put my ideas about CMR into practical form, I honestly thought that the series would comprise five or so volumes. To start, I focused on the period 600-1500 and for practical reasons divided works according to the languages in which they were written, mainly Arabic, Greek, Syriac and Latin. A small team of scholars in these languages came together, and each set about making lists of works from this period in their particular language. Following this, each found specialists to write on the works in their lists. A specialist was to write an entry on the work and its author according to a set model that included a brief biography of the author, a description of the work’s contents, picking out its use of earlier works and main arguments against the other faith, and an account of its significance in relations.

As the first entries appeared I began to realise how modest my initial estimate concerning the volumes was. Works from the first three centuries of encounter could be accommodated into one volume of almost 1,000 pages, but then the works from later shorter periods of 150 years each took up volumes just as big. Works from the whole period 600-1500 alone occupy the five initial volumes I had imagined.

As the project developed into the second phase covering 1500-1914, and moved out from the heartlands of Islam and Christianity to cover the whole world, the division according to language could no longer be applied. In these later volumes, works are divided into geographical regions. Works from the sixteenth century take up four volumes, each devoted to a region of the world, and the team anticipates that works from the nineteenth century, which we are more than halfway through, will take up eight volumes. Volume 20 will be on works from Iran in the nineteenth century, and the last of the bibliographical volumes will be dedicated to Western Europe. There will be two additional volumes comprising essays on themes repeated through whole successions of works. So, in total CMR will make up twenty-four volumes and will have involved over a thousand editors and contributors. We hope to complete the set by 2025 at the latest.

Regarding the history of Christian-Muslim relations, it may be fair to say — or not — that what first comes to people’s mind are images of war, conflict, polemics. What do you think about this and does this inform your approach when editing a volume of CMR?

It would be difficult to deny this. The model was set in the very early years of Islam, as first the Prophet Muhammad then his successors as leaders of the Islamic community sought to expand the Islamic state by sending out armies of conquest. Within a century they had brought under Islamic rule territory stretching from the Atlantic to the Indian Ocean, and from Siberia to the Sahara. Defensive reaction by Byzantine emperors, followed by European incursions into Middle Eastern Muslim lands in the Crusades of the twelfth century and after, as well as armed Christian recovery of Muslim Spain, consolidated impressions on both sides of the religious ‘other’ as a hostile enemy.

But this is not the whole story. Within the Islamic Empire there were large indigenous populations of Christians (for many of whom Arabic was their first language). In Baghdad in particular, their capabilities as medical experts, scientific authorities and translators came to be recognized and appreciated. In fact, there were places where followers of the two faiths studied and taught together as colleagues.

The underlying problem is that according to the teachings of each religion, there is no room in God’s plan for the other. According to Christianity, Christ is God’s supreme and final revelation, while according to Islam the supreme and final revelation is the Qur’an. It follows that in Christianity anyone coming after Christ must be a fraud, and that in Islam anyone claiming finality before Muhammad must be in error.

Are there positive encounters or meetings (cultural and/or political) between Christians and Muslims (individual or civilizational), the effects of which are still felt today?

We could certainly wish for more than the few we know about. I have just mentioned above the respect in which Christian experts were held in Baghdad and other Middle Eastern cities in the ninth and tenth centuries. Coupled with that, the caliph’s doctor was usually a Christian because of the knowledge held in the Christian community about matters medical. It is also generally accepted that Christians living under Islamic rule in Spain in the Middle Ages also enjoyed certain measures of freedom. These examples are of Christian communities living under Muslim rule. It is more difficult to find Muslim communities living with some measures of freedom under Christian rule, although European Christian governors of African colonies in the nineteenth century are known to have built mosques for Muslims. Of course, the story is rather different under secular governments in the twentieth and twenty-first centuries.

What are the challenges encountered by the CMR series in the light of current events unfolding?

The story that can be traced through CMR is largely of opposition, polemical arguments and oppression, though it should be borne in mind that it is a story based on literary sources that by their nature originate from elite classes who could afford to maintain their differences. If more sources were known for lower social classes, where the practicalities of life necessitated close dealings and active cooperation with followers of the other religion, it might be quite different. The fact that certain Islamic legal experts had to forbid exchanges of presents between followers of the two faiths on feast days in medieval Spain, and constantly felt the need to remind Muslims not to eat certain foods at events organized by Christians points to unexpected neighbourliness among some communities at certain times.

The works described and analysed in the volumes of CMR are generally dark in their depiction of Christian-Muslim relations. It is often possible to see in current events involving the two faiths the same prejudices that can be witnessed in very early works in Arabic, Greek and other languages. CMR often makes clear that these were frequently invented for the sake of explanation rather than being derived from the authority of scripture (e.g. Muslims held that the four Gospels were written by disciples after the original divinely authored single Gospel revealed to the human prophet Jesus by God had been lost or destroyed, in order to give historical substance to brief allusions in the Qur’an of scriptures being altered; Christians held that the Prophet Muhammad was an associate of the Devil in order to explain his apparent success in attracting followers and winning a vast empire). CMR shows that these stories were products of particular times and contexts. The series could thus help people see that historical attitudes often have no greater authority than their longevity, and that fresh reflection on authoritative scripture could lead to very different perceptions of the religious other than have persisted to now.

What role would you like to see CMR have in the field?

CMR is intended primarily as a research tool. It introduces scholars to works that will often be new to them and provides the equipment to begin to investigate them. This is in the form of descriptive outlines of the works’ contents and explanations of their significance, together with exhaustive lists of manuscripts, editions and translations, and of studies on them. It will hopefully provide a way of both widening and deepening the field and of exploring its richness.

It will also remind researchers of the long traditions of stereotype images of the other that were generated in the fierce polemical exchanges of the early Islamic period, and were gradually taken to be accepted without question. But most have only tenuous relations with scripture itself, the source of reliable authority in both religious traditions. CMR might provide the reasons for Christians and Muslims to abandon these images and the prejudices derived from them, and to begin to accept one another afresh as partners in faith and morality.